Thanks a lot, BarGraz!
I will do my best to keep the portability and prevent becoming monstrous. I think at least it should be possible to move all the "jack-of-all-trades" features to another product line aimed specifically at business/enterprise users.
Alex
Top

Alex, so what you seem to be envisioning is two versions of CintaNotes: CN Personal and CN Business. I think that would be a good solution to the problem. For me (and I suspect for many others), the great appeal of CintaNotes is its simplicity, and I would be very uneasy if you were to start adding a lot of new, unrelated functions. But if folks in the business world want more powerful software, I can imagine that it might make sense to build upon the excellent basic framework of CintaNotes.
Top

Hi Bill, yes I think this could be the best solution. But the negotiations are still going, so maybe we won't have this problem at all. We'll see)
Alex
Top

Hey, so this thread is originally from late June 2019, coming up on a year. Is CintaNotes v4 going to be a thing this year?
Top

Unfortunately the investor has paused the negotiations because of the pandemic financial difficulties, so for now we're on our own.
Or to be more precise, I'm on my own, since I'm now the only one dev in the project.
And all I can tell is that I'll do my best to release V4 this year.
One thing you can be sure of, is that the project is not abandoned and I'm still working on CN.
Alex
Top

Alex, in 2017 you gave us a series of screenshots of Version 4, which I thought was very helpful in offering a glimpse of the future. Is it possible you might do something like that again? It would encourage those of us who wait (more or less patiently) for the next release.
Top

Actually these weren't screenshots, they were mock-ups I made in Axure RP - an UI prototyping tool.
Basically just little more than painted pictures.

Well I am usually very reluctant to show unfinished work. Mostly because it is often misrepresentative.
The most time-consuming groundwork is laid out first, but it is not very impressive on the visual side.
And the most visual polish is achieved at later stages.
But I can post a screenshot of what CN4 looks like right now. The basic things already work - the list, the search,
the tag sidebar. Section tabs coming next. But right now I'm working on improving the scrolling speed. That's why
there's an FPS counter in the lower left corner. It won't be there in the finished product, of course. 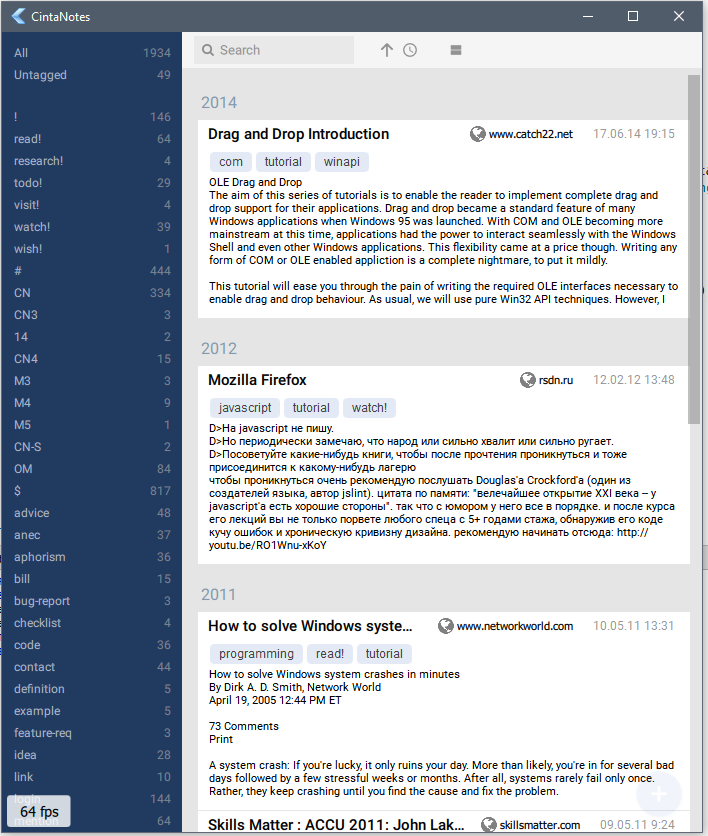 Thanks very much, Alex. Your sample screenshot is attractive.

CintaNotes is a really excellent note-taking program that I use daily. Since I'm not very technologically sophisticated (as I'm sure my messages here show), my concerns are mainly focused on the visual aspects of CN. You've said that in Version 4 it will be possible to change the background color of notes, and you've also announced that images will be treated in a more sophisticated way. Both of these are welcome developments.

The only other serious annoyance for me in the current version is the lack of a spell-checker. I continue to hope you'll come back to that problem in the future.

In your screenshot the text in the tags column is pale blue. That may seem aesthetically clever, but it unfortunately also makes it slightly less legible. I would suggest a pure white font (against a dark blue background) instead.

I'm also watching with interest how you handle tag names at the top of each note. I remarked once before that for those of us using many tags, they often -- in the present version -- slide off to the right and become temporarily invisible. I trust you will find a solution to that problem.
Top

Bill, thanks a lot for your kind words and for the input! I'll definitely take into account.

About spell checker - well, I think it will definitely come someday, but only after CN4 is released..
About handling too many tags for one note - well, all solutions here are bad in some way I guess. Probably a good solution would be take a multi-step approach here:
1) first, hide parent tag names.
2) second, cut off long tag names
3) If that it still not enough, the extra tags will be hidden behind an ellipsis that you can hover over.

I don't want to allow the tag line to grow onto the second line, because having a tag line that is variable in height will slow down scroll speed.
Alex
Top

I *really* *really* love CN's current UI. It's from a time when Windows user interfaces were at their best in terms of visual appeal, in my opinion.

So I'm looking forward to version 4 and maybe a native Linux version, but I hope the DB format will be compatible so I can still use version 3 on Windows.
Top

Thanks for your comment, sardaukar_siet!
The database format will be compatible at first, but may diverge later.
Alex
Top

I second the opinion of sardaukar_siet on the UI.
Keep the general principle, I prefer it when compared to the principles of many UIs of the recent years.
Top

I've been using Cinatnotes for about 5 years now, and I just wanted to check in to see that it's still an active project. Just wanted to write here that I'm so very, very grateful for your product! I have a lifetime license already and would be willing to pay more to keep using Cinanotes!
Top

Well I can now tell that the negotiations went south because of the coronacrisis. So we're on our own. Very slow development, but not owning to anybody. Maybe that's to the better

Well ... don't give up. Keep up the good work with the software, and also keep your faith whatever you wishes may be.

Looking forward to a even more versatile and feature rich version 4.
Top

Thanks a lot, clabr!
For some reason, I didn't receive notifications about posts on the forum, so it seems I'm quite a bit behind.. sorry.

With CN4, there's been another setback. After a lot of pain, I finally came to conclusion that the chosen technology (QML + QtQuick) was not a good fit for desktop CN because it worked quite poorly with text (QML's TextArea struggled to edit even a few Kbs of text). Sure I should have checked this before investing so much time in it. But anyhow, I decided to switch to tried and true QtWidgets. Less support for animations, but much faster and stable.

So now I'm back on track, however a lot of time was lost. I'm determined to see it through that CN4 sees the light of day, however long it takes. CN is not dead yet!
Alex
Top

All of these problems are my fault! I bought a lifetime licence...that is always a kiss of death to a project

Alex, sorry to hear about the setbacks in developing version 4, but I want to offer a few words of encouragement. I'm sure that I am not the only person who finds CintaNotes immensely useful every day -- a cleverly designed piece of software, modest in scope but very powerful within those limitations. It deserves to be far better known.
Top

Why you need a new version of the program? 3.13 is working very well. There is no need to rush.
Top

DrTeeth wrote:All of these problems are my fault! I bought a lifetime licence...that is always a kiss of death to a project

Of course!! And all this time I wondered who might be responsible!

Bill wrote:Alex, sorry to hear about the setbacks in developing version 4, but I want to offer a few words of encouragement. I'm sure that I am not the only person who finds CintaNotes immensely useful every day -- a cleverly designed piece of software, modest in scope but very powerful within those limitations. It deserves to be far better known.

Thanks a lot for the encouragement! Really appreciate it. Even with all the setbacks, the migration will be worth it - just imagine having CN for all 3 major desktop platforms, this will be huge. And Qt also allows to develop for mobile. So it should be well worth the wait.
Alex
Top
Post Reply
41 posts