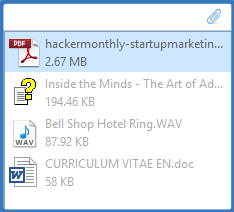 We’ve got great news for you – the long awaited file attachments feature is finally here!

You may be wondering why it’s 3.0 when previously I was talking about version 2.9.5. Well, we gave it a second thought and decided that the new feature certainly deserves more than a third digit increase. I know that I already promised the 3.0 release to have a revamped UI. After discussing it for a while with users on the forum, the decision was to simply renumber the releases, and make the UI redesign target version 4.0 instead. Looking at Firefox 41 and Chrome 45, going from 2.9 to 3.0 seemed like no big deal.

But let’s get back to the file attachments. This is a new PRO feature, and the main point is simple: now you can attach files to notes and synchronize them between your computers.

The files are stored in compressed form in the notebook itself. So when you attach a 10 MB file, the size of the notebook may grow by much less than 10 MB (this depends on the type of the file – if it’s already compressed, the notebook will grow by the whole 10 MB and maybe even a little bit more). On average, however, the benefit of compression is noticeable.

What, you’ll ask, my files will be uploaded to your server? How secure is that? It is secure – the files (and even their names) are encrypted with your Simplenote account password. No one will be able to decode the files without having this password.

One caveat here is that since uploaded files are encrypted, it is not possible to access and download them from any Simplenote client. You need CintaNotes to access the files.

I also have to warn you that the image-related functions are quite basic as of now: no inline images, no thumbnails, no image clipping. We plan to address these issues in the upcoming versions.

Here is quick demo of the feature:

Well, this is basically all you need to know about file attachments in CN. If you’re interested to read more about this feature, please refer to the new help section devoted to it.

Version 3.0 also contains a large number of fixes which should make the program much more stable and reliable. The complete list of changes can be found here.

Huge thanks to the people who helped us with the beta testing of this release!

Hope you enjoy the new version!