It’s time for a new CintaNotes version! Want to know what exciting new features does this update bring to the table? Read on.

In the past, using remarks was quite limited because they were only visible in the note editor. Yes, you could serch by them, but that was it. Now remarks are displayed directly in the notes list, and when there search matches in there, they are properly highlighted: 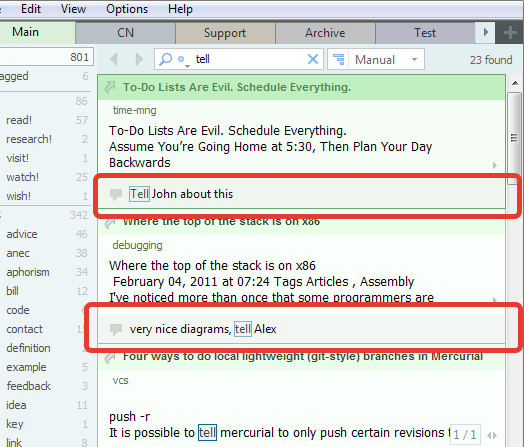 In the Options / Notes List dialog you can now specify whether remarks should be displayed, and if yes, the maximum number of text lines that should be included into the preview: 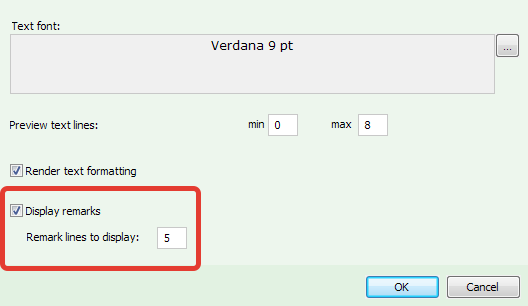 In this version we tried to make CintaNotes a bit smarter in regards of which tags are suggested when you type them into any tag input field. Previously, tags from all sections were suggested regardless of current context, which could lead to very lengthy suggestion lists.

In this version we introduced the Options / Tags / Context-Sensitive Suggestions option, active by default, which limits suggested tags to the ones already used in current context. By “current context” we understand currently active sections, and, in case of note editing, also the edited note’s section.

This feature is especially useful when you press Cltr+Space without typing anything, to force suggestions display. The list of tags will be much shorter. In case you want to see tags from all sections, simply press Ctrl+Space twice.

Note that if the current context doesn’t have any possible suggestions, CN will suggest tags from the whole notebook. You can force this at any time by pressing Ctrl+Space.

Hope that you enjoy the new release!