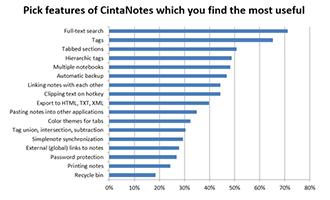 Some time ago we invited the subscribers of our newsletter to take part in the user satisfaction survey. Today I’d like to share with you the results of the survey as well as the conclusions that we could draw from it.

We received a lot of insightful responses and useful feedback. Roughly every 10th recipient took the survey, and taking the holiday season into account, this is quite a success!

When conducting a survey, there is always a risk that only those who are already regularly using the software will participate, and that’s why the first question was about the CN usage frequency. As expected, the majority (55%) of the participants stated that they use CintaNotes every day. However, 11% of the participants admitted to not currently using the software, and we are thrilled that these people not only participated, but also provided reasons for their skepticism, which turned out to be extremely valuable knowledge.

The second question was about CintaNotes usage scenarios. We wanted to see if there were some popular use cases that we missed in planning new features for upcoming CintaNotes versions. No big surprises here though: using CN as a knowledge base, and for collecting reference materials and ideas dominated the answers: 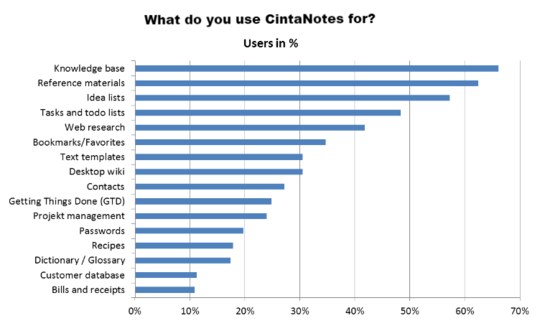 However, more people than we expected are using CintaNotes for task management and to-do lists. This means that we’ll prioritize related features: better support for tasks and a reminder system.

Question 3 was to identify our current strong and weak points. You can see the question, and the average received marks below: 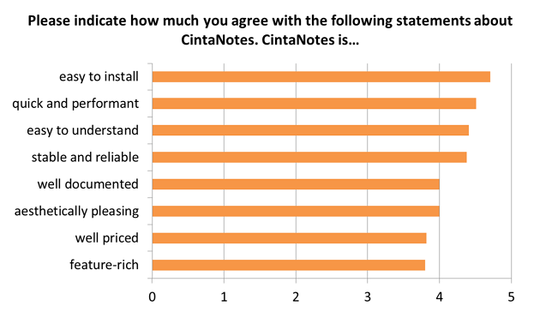 The majority agrees that CintaNotes is easy to install, quick, simple, and reliable. However, the product’s documentation, user interface design, feature set, and pricing policy received less favorable ratings. It seems that this is where we should be focusing our efforts.

Probably the documentation was rated poorly because it was available only in English (the worst marks here were given by people taking the survey in Russian or German). We are already working on the German and Russian versions of the site with localized documentation, and then other languages will hopefully follow.

Many people think that CN’s user interface looks a bit dated, and we tend to agree. We plan to do a major UI “facelift” in version 3.0, which we already started developing and which will come after the current major milestone, version 2.9.5 with file and image attachments.

We agree that a lot of features are still lacking, but as you can imagine, it is quite difficult to keep the software simple and stable, and at the same time constantly expand its feature set. As one of our respondents pleaded, “a fantastic application – but PLEASE, PLEASE in the name of “Development” DON’T add levels of bloat and make it sluggish, less easy to use etc… for me it’s just PERFECT as it is!!”  All I can say here is that we’ll continue to try our best to strike a balance between simplicity and usefulness; we’ll optimize performance when needed, reorganize things to make the UI clearer, and cut features that no one is using.

The question of pricing is not an easy one. Last year, we introduced a lifetime license and also raised the license price. This was not a very popular decision among our customers, but if we didn’t do it, we wouldn’t be able to work on CintaNotes now (and once more, a big thank you to all who supported us and bought a license!)

However, one of the participants pointed out a problem with our pricing policy: regardless of how many times you renewed the updates subscription, the price of upgrading to the Lifetime license remained the same. We agree that this is not quite fair, and in the near future we’ll introduce special discounts for upgrading to the Lifetime license for those who renewed the regular license at least once- stay tuned!

Question 4 was about most heavily used features of CintaNotes. Here are the results: 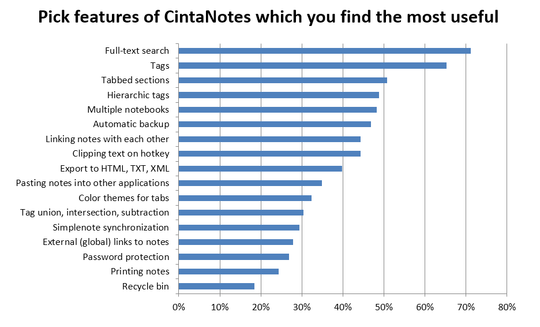 As we expected, our users ranked full-text search and tags as the most popular features. It came to us as a surprise that the Ctrl+F12 text clipping function scored only the 8th place, we used to think that fast clipping was an important distinctive feature compared to other software.

I consider the results here to be inconclusive, and we’ll probably need to do some more research here. Clearly recycle bin is on the last place not because it’s not needed. It’s just basic function which people have come to expect, and the same goes for password protection and printing.

This question asked about features that CintaNotes is currently lacking. The results: 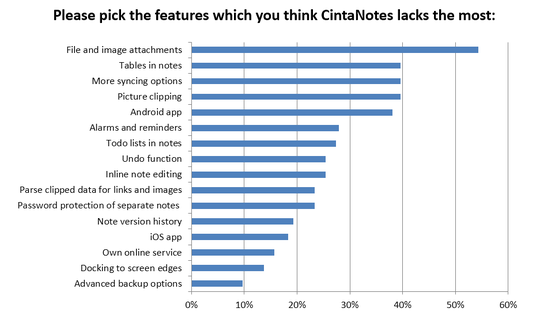 No big surprises here as well – the most wanted feature is ability to attach files and images to notes, it is also top rated on our roadmap. This feature is now already almost finished and will appear in version 2.9.5 later this month. The first beta version is already available on the forum.

Here we wanted to learn about the obstacles facing regular CN users, their main woes. We received a lot of exteremely useful comments. Ten most often mentioned problems were as follows:

1) No images/file attachments support
2) Limited clipping of webpages
3) No own app for Android
4) Updating process should be made easier and warn about license key validity
5) Difficult to navigate config menus and dated UI look, should be updated
6) Not convenient that notes open in a new window for editing, and that there’s no way to copy text from note preview
7) Little ability to customize colors
8) No support for tables and some other text formatting
9) No text formatting toolbar in editor
10) No alarms/reminders

We can see that the named usability problems have quite a strong relation to the answers to questions 3 and 5.

Only 23% of respondents reported that CN ever froze or crashed on them, which we consider to be a good result, but will still try to improve stability in the future. We’ll investigate every reported crash or bug. Special thanks to those of you who specified detailed problem reproduction steps.

We asked this question because we want to know who our users are. The results confirmed our expectation that the majority of our users are highly educated professionals.

Information technology sector dominated among occupations, which pops the question if we should consider prioritizing features aimed at IT professionals such as syntax highlighting and such.

A bit surprising also was high rate of retired people. (Probably it is because they simply have more time for completing surveys.)

Combining the results together, we can deduce what features we SHOULDN’T focus on right now:

And here are the features which we SHOULD be working on during the next months:

Other than that, we’ll need to revise our pricing policy and improve the documentation.

If you’d like to discuss the survey, its results, and our conclusions, you’re welcome to do it on our forum in the designated topic.

Thank you very much for helping us drive CintaNotes development forward!